While I know that it is very important to breed with the best mares and mare lines one can afford, it wasn't until I had my own stallion go through the Hanoverian Stallion Licensing and Market in October this year, that I realized just how proud breeders are of their stallion mothers.

Crescendo SF, by Canstakko is out of SPS Casandra by Contender.  Casi had produced Elite Auction horses and successful competition horses, but not a licensed son.  People would ask about the mother of my stallion and then comment, "well, maybe Casi will become a stallion mother afterall". It was clearly a point of pride to own a mare which had produced a licensed stallion.

In the US, the mothers of stallions are rarely discussed; the sires are deemed most important.  This is partly due to the fact that we have been breeding warmblood horses for only about 50 years so have not really developed mare lines.  In Germany, all the breeders know, or have access to information, about which mares and mare lines have proven themselves by producing successful performance horses, state premium mares, and licensed stallions.

Sylvan Farm has produced 3 licensed stallions over the years.  I would proudly like to recognize these stallion mothers in this article.  First, 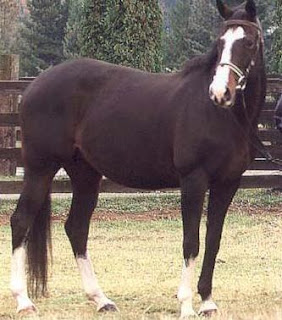 Pia Blanca by Pik Solo o/o Ambling Picture xx by And Behold xx, born 1984
Pia is the mother of Agincourt by Abdullah.  Agincourt was licensed in 1994, successfully completing the 100 day stallion test with a score of 126+ in jumping.  He went on to have a successful career in show jumping with Joe Fargis and Hap Hansen up to the national Grand Prix level.  Following his jumping career, Agincourt competed in dressage through Prix St. George with scores in the mid-60's.

Pia's mother was the Thoroughbred mare Ambling Picture xx by the successful jumper sire And Behold xx.  Ambling Picture xx was a line bred Teddy xx mare.  Dr. Peter Birdsall's research into the pedigrees of world class competition horses reveals that there are six 'Universal sires' which appear in over 50% of world class competition horses, whether jumping, dressage, or 3 day eventing.  Teddy is one of the Universal sires.  He was one of the first Thoroughbreds used in the German warmblood breeding program and is listed as the founding sire of the 'M' line and the 'T' line stallions for the Hanoverian horse. (taken from 100 Jahre Hannoversches Stutbuch by Dr. C. Freiherr von Stenglin and Dr. W. Hartwig)  Some especially noteworthy competition horses with Teddy in their pedigrees were (in dressage) Olympic medallists Ahlerich, Angelo, and Amon and the international jumpers Jet Run, Idle Dice, Touch of Class, I Love You and Bean Bag.  In addition to Pia, Ambling Picture xx produced multiple Champions in dressage, hunters and jumpers.

Pia produced many successful offspring and her daughters carry on the tradition.
>Far Star, by First Gotthard, represented the US and AHS at the 2003 World Championships for Young Jumpers with Olympian Laura Kraut in the irons.  They finished 24th out of 161 jumpers from around the world, never had a rail down.
> Elite Mare Francesca, by Wanderer, competed successfully through level 6 in the jumpers; finished her Mare Performance Test with a 7.72, with 10/9 for jumping.  She is in the AHS Jumper Breeding Program, as is her daughter Fiona.
> Elite Mare Fair Lily, by First Gotthard is a full sister to Far Star above.  She completed her Mare Performance Test with an 8.11, with 9/9 for jumping and is in the Jumper Breeding Program. 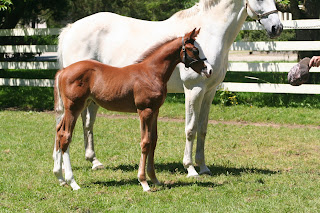 In the next part, Elite Mare Pikante' will take center stage as a stallion mother.
Posted by Judy at 3:45 PM